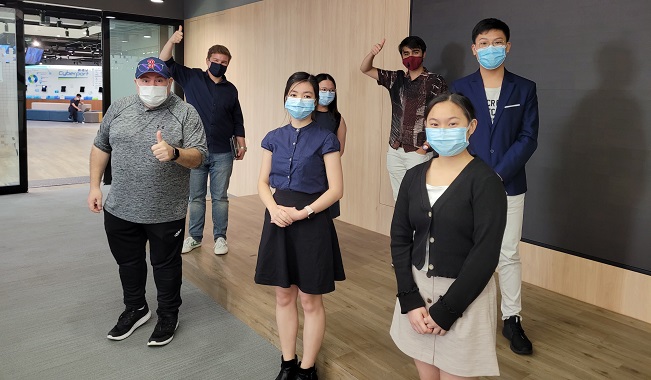 A group of Year 11 students represented Island School at the final round of the Blockathon Asia Competition and won the overall champion and highest scorer of the contest.

Held in Cyberport on 27 March 2021, Blockathon Asia is a competition that mixes the traditional hackathon approach with much more corporate involvement and technical depth. Students had to solve an existing real world problem posed by corporate partners using technologies such as Blockchain and AI and pitched their innovative solution to the judging panel at the final rounds.

The team – Sean Lee (11N), Hoi Ki Tiffany Leung (11E), Sum Kiu Fong (11R), Kirsty Chu (11N) won with a business idea that would revolutionize the contracted field of law. Adjudicators from KPMG Mr Anson Bailey, Mr Benjamin Usinger and Blockchain Startup Mr Jayesh Chatlani highly praised about the idea and business model, and have offered internships and job opportunities in their corporations in the future. Students would also be able to continue working on their idea and bringing it into reality in the vibrant and stimulating world of startups, with funding support from KPMG, InvestHK, Google, Lenovo, Puma, CLP, Siemens and other corporations.

This is also the first time Island School has won a business technology related competition. Mr Paul Bentham, Vice Principal commented, “This was an excellent event that developed students’ skills in the emerging technologies. Congratulations to the students on a superb performance, Island School is proud of your achievement.”

Activities – Back On Campus!