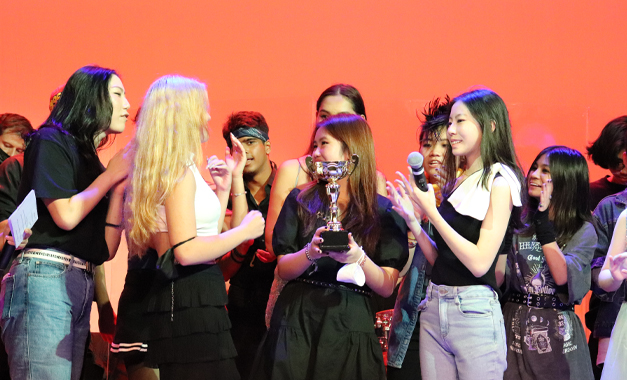 STARS, Island School’s long running music show was reignited this year setting a new stellar course for the future. Eight music acts, a choir and a full orchestra made Island School history by being the first to perform in the campus’ new auditorium, on 1st November 2022. Three hundred and fifty guests packed-in to see this long awaited gig, with tickets selling out in 48 hours.

But it was not just the new venue and the new name that gave STARS (previously known as Stars in Their Eyes) a fresh feel this year. Deputy Head of Arts (Music), Joseph Travers explains more, “STARS is a celebration of live music and after a 3 year break that has never been more important.”

“This year I wanted all the live acts to feel like they were in it together, to support each other and for them to get as much out of the eight weeks rehearsal time as possible.”

“With this in mind, professional singer Miriam Ma along with professional musicians from Y-Rock, hosted workshops with the vocalists and finalists to help them develop their technique and prepare their act for the show.”

“As a music department we want as many people to be part of the show as possible. Over 150 students take part on stage in the STARS choir, orchestra and Dance group. Our student tech team worked tirelessly behind the scenes to bring the production to life, learning how to run sound, lighting, stage management and media in the new Performance Space.”

“The biggest difference about STARS this year has been the way students are with each other. I think the finalists created a team that wanted to do their best for each other.”

Amanda Hokerberg 11E, Alexa Wong 11E, and Haley Ng 11N won the audience vote on the night with Rolling in the Deep by Adele.

Jayden one of the finalists, said, “The finalists definitely supported each other and I got to know people in other years who I would not have become friends with if we had not been rehearsing together.”

The winners and finalists of STARS 2022:

TRIO: “Rolling in the Deep – Adele”

Chloe Flatt 7NF On My Own – Les Mis