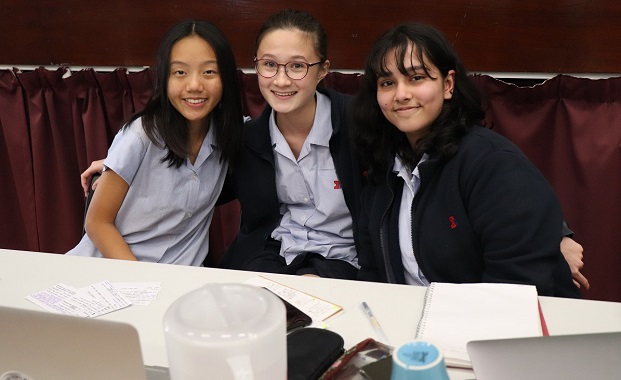 Tai Wai students spent their Thrive lesson this week, watching the Inter-House debate final take place.
Debating the motion on ‘This House would sanction countries that persist with cultural traditions that do not promote equality’, the two highest scoring teams from the qualifying rounds, Rutherford (proposition) and Da Vinci (opposition) presented detailed and powerful arguments over the 40-minute debate.
Danny Nason, English teacher said, “It’s been a great competition this year and the final standings were very close but Rutherford and Da Vinci deserved to be in the final. Both teams were excellent throughout and provided a great spectacle for the rest of the campus. It takes a lot of courage to stand up in front of a large audience and engage in a complex discussion, particularly considering they had only received the motion and their stance just a day beforehand. All six of the speakers rose to the challenge and I was impressed by their passion and insight. The fact that all students have mock exams in the next couple of weeks just proves their considerable commitment to academic excellence.”
Congratulations to Da Vinci who won the debate, according to a panel of judges made up of students from other houses.
Speakers in the final round:
Da Vinci
Angela Chen (10D), Noor Rizvi and Anya Broad (11D)
Rutherford
Will Chan (11R), Anakin Teahan (10R) and Yu Hang Hui (11R)

Back to School in Picture
Message from Middle Phase VP, Nick Lee