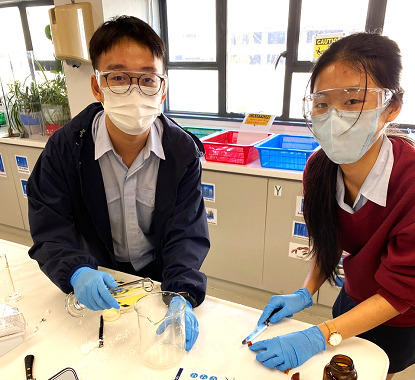 With a focus on reducing Island School’s carbon footprint and making it a more sustainable place, the environmental ambassadors have launched an ambitious zero-waste initiative. With recycling stations at both campuses, a service is now offered whereby the wider community can bring in other waste items to be recycled. These items include Type 2 (HDPE) and Type 5 (PP) plastics, food and liquid cartons and polystyrene. This update focuses on the polystyrene aspect of the endeavour.

Did you know that more than 13 million tonnes of polystyrene (plastic foam) are thrown away each year? Even in Hong Kong, about 30,400 tonnes of waste styrofoam were disposed of at HK landfills in 2017. This causes a great problem for our environment. When styrofoam gets into the ocean, it disassembles into polystyrene beads, which can be consumed by aquatic creatures. The sea creatures may choke or starve, and the creatures (including us humans) who eat those animals eventually end up with the plastic in their own bodies. Also, much of the Earth’s polystyrene ends up on the streets, disrupting landscape and nature. This stays there forever as it doesn’t biodegrade, and bacteria and microorganisms don’t feed on it either. With our landfills filling up at a rapid rate, styrofoams add on to the burdens of it as they take up a lot of space (sometimes accounting for 30% of the space in some landfills).

That’s why we started our polystyrene recycling scheme here at Island School. Through recreating a method that some high schoolers in the United States created, Ady Lam (11E) and Sam Hui (11W), the student leaders of the project, were able to conduct a successful test run this week under the supervision of Mr Burrough, Ms Burgon, Ms Thomson, and Ms Beveridge.

Sam Hui (11W) said, “This has been a fruitful and rewarding experience for Ady and I. We craved to run this long ago, and were very excited for today’s test run! It was gratifying to see the polystyrene dissolve bit by bit in the mixture, as we were able to convert waste into usable glue! Despite the initial difficulties we had, we were able to overcome them so thanks to the support of our supervisors. We are looking forward to implementing this on a wide scale in the near future.” 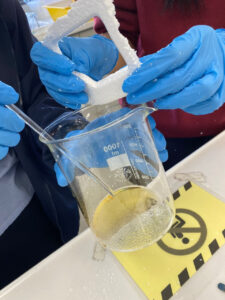 Dissolving the polystyrene in the mixture

The procedures of the experiment include mixing lecithin with D-Limonene, before adding water a little at a time, mixing thoroughly with each addition. After ensuring that the solutes had completely dissolved, the polystyrene collected could be added to the mixture, which will then gradually dissolve. The solution could take up to an hour to settle, before fully becoming an adhesive.

“We have been building up a steady arsenal of expanded polystyrene at school, and I was very excited to be able to use some of it and make glue today.”, exclaimed Ady Lam (11E). “The process went a bit slowly because it was the first time Sam and I had done this, but with the help of our science teachers we were able to successfully make some glue. A chemical we used was D-Limonene, which is found in the oil of citrus fruit peels, and so the glue even smelled like oranges! I am pleased with our first batch of glue and I’m looking forward to making it on a wider scale.”

You can support this project by bringing in any polystyrene waste you have at home to one of the waste collection stations in either Tai Wai or Sha Tin Wai campus. However, do make sure you have thoroughly cleaned, washed and disinfected them before you deposit the waste into the bins! Polystyrene is a number 6 plastic so please ensure you check the number under your containers before depositing it.

As we move forward, we are looking to scale this up by recruiting new student volunteers to help out in this inaugural exciting initiative. If you would like to volunteer, please contact Ross Burrough (ross.burrough@online.island.edu.hk) or Joanna Burgon (joanna.burgon@online.island.edu.hk). Space on the teams are limited, so early sign up is advised.

For more regular updates and announcements on the project, as well as opportunities for students to get involved in our initiatives, please go to WANBO’s Instagram page @iswanbo.