Adrian Tam was selected as one of the best delegates in his committee in the 2017 Model United Nations conference hosted by Li Po Chun United World College. He was given an honourable mention due to his willingness to speak and push the committee’s debate forward. 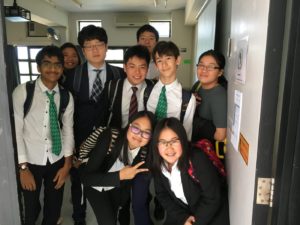 Over two days, 1-2 April, he and six other Island School students represented various countries around the world within multiple UN committees, such as the World Health Organisation and the African Union. These committees debated and wrote resolutions to some of the world’s most pressing issues. In the African Union, for example, delegates were tasked to discuss measures to combat illegal ivory trade. Student Priscilla Lee, representing Botswana in the AU, said that: “I had a great time debating and meeting new friends, and I certainly learnt a lot from this conference; whether about the topics or MUN itself, the knowledge I have gained will be invaluable to me in the future”.

By Van An Trinh, Media Team