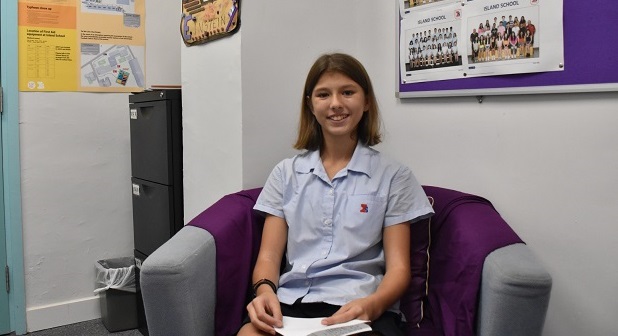 After competing in the Futera Bangkok Girls Cup 2019, Juliette Rutkowski from (9E) told Media Team member Grace Zheng about her passion for football.

Playing as the winger in the team, Juliette started playing football in Year 2, this is the sixth year she’s been participating in the sport.

“I came home one day and asked my mum if I could join my friend – a boy and play football. When I first started, I had to play on the boys’ team as I was the only girl (one other girl joined later). That was quite a struggle at that time.” recalled Juliette.

She explains that she considers one of her greatest achievements so far competing at the Futera Tournaments in Bangkok, in October. Due in part to the heat and the pitch, “The heat was definitely one of the greatest challenges at the tournament. As a team from Hong Kong, we aren’t used to playing in such hot weather, especially on a grass pitch. Yet, our coach was there to encourage us to ‘keep our heads up’ whether we are winning the game or not, and that I think was a key message which kept us all going.”

When asked about what attracts her most to football, Juliette said, “I really enjoy how the pace of the game just changes drastically. One time you could be winning but a goal can change everything.”

Juliette has set her sights on getting a scholarship to study Sports Science – her ultimate goal in the near future.