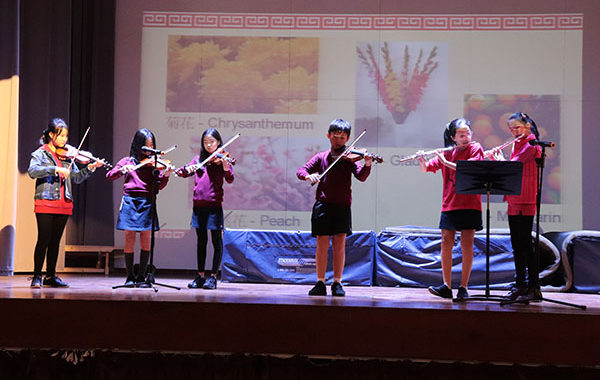 In the lead up to the New Year of the Metal Rat, we at Island School hosted our special Chinese New Year assemblies and two of our students recall the events:

“On the morning of Friday 17 January, the Island School Tai Wai school hall was abuzz with chatter and excitement as students piled into the space, ready to watch the brilliant performances of our annual Chinese New Year assembly.

The Chinese New Year assembly began Island School’s traditional series of Lunar New Year celebrations, where performances by the school’s Chamber Orchestra as well as students from the neighbouring Ng Yuk Secondary School were featured. Described as “fun and fresh” by violinist and English emcee Yasmine Lunt, the assembly took students on a journey that explored the various aspects of Chinese culture.

The Ng Yuk Secondary School students enlightened the audience with an engaging presentation on the traditions and practices of Chinese New Year. The Chamber Orchestra skillfully delivered two traditional Chinese musical pieces – Jasmine Flower and Welcoming the Spring Flowers. All this was wrapped up by the tradition of the whole Tai Wai school, together, singing Gong Xi as one.

Aoi Sakamoto (10N) was one of the students in the audience on the day. “It was nice to see the local students participating in the assembly,” she said, “The assembly itself was very interactive – I myself Iearned a few Cantonese words to wish my family happiness, as well as the traditional customs and cultures we should follow during CNY.”

Special thanks to Ms Teri Eves for creating the opportunity for the two schools to collaborate on the assembly, with three of the NYSS students being part of the Community English program run by IS.”

“On Tuesday, 21 January, the Island School Sha Tin Wai campus came together for their celebration for Chinese New Year, led by Year 12 students Jamie Wong (12R) and Wenxi Chea (12R) who presented in English and Mandarin.

There were various performances such as year 7s and 8s singing and playing instruments, as well as a touching song sung by Raphael Tsang (13D). The assembly ended in tradition of the whole school singing to “Gong Xi” which lifted everyone’s spirits.”

Click here to see our spectacular assemblies in picture!